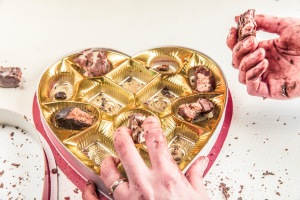 Whoever has experienced a food craving knows that food craving and hunger are not the same sensations. When we are hungry, our blood sugar and insulin level drop and our brain receives a signal that it is time to eat. Through the vagus nerve the hormone ghrelin communicates with the hypothalamus and we recognize our body needs food. Once our insulin and blood sugar levels are back to normal and with the help of the appetite-inhibiting hormones (like leptin), the brain receives another signal that we had enough food.

But food cravings are like an uninvited guest; they just show up. And when they do, we do crazy things like visiting a gas station at 10 p.m. just to find our favorite ice cream.

Some say food cravings are just the way our body shows us we need a specific type of nutrient. This premise should not be neglected. For example, you will often hear dark chocolate is high in magnesium, and a deficiency in magnesium may play a role in these cravings. However, I’ve never heard someone craving carrots or sour cabbage (maybe pregnant ladies) and people mostly crave for food loaded with fats and sugar like chips or chocolate cookies. But you can hardly say these foods contain valuable nutrients.  So while there is certainly some truth in the fact food craving is the way our body is telling us we need some type of nutrient, most people would agree that food cravings are more about a psychological hunger than a physiological one. They are often triggered by some kind of feeling. And the answer for this psychological hunger can be found in our brain and its neurological pathways.

It is well-known stress, for example, increases consumption of food rich in fat or sugar. Brain images show overeating affect the brain in a similar way as cocaine and heroin. Behaviors such as drinking too much alcohol or drug abuse can activate the so-called pleasure centers in the brain that involve reward, learning, motivation, memory and decision-making. Sugar and fatty food consumption induce brain release of the neurotransmitters traditionally associated with the rewarding effects of drugs of abuse: opioid peptides and dopamine. The opioid system is involved with the liking and the pleasurable responses to the intake of highly palatable foods such chips or ice cream. Dopamine plays a major role in motivation involved with reward.

Food intake, particular consumption of high-calorie foods, stimulates dopamine activity, creating a subjective feeling of pleasure and satisfaction. So when we feel depressed, unmotivated, tired or simply in a bad mood, we might experience low dopamine levels. And when the dopamine levels are low, most people reach for food (usually for high-sugar of high-fat food) although they don’t feel hungry. But dopamine isn’t the only neurotransmitter “to blame”, there are several neurotransmitters in the brain that have been connected with both food and drug intake (and related to dopamine and the opioids) including acetylcholine, GABA, and glutamine.

The term “sugar addiction” has been present for many years. People can easily describe symptoms of withdrawal when they try to withhold themselves of sugar intake. They describe craving, especially for food high in carbs, like chocolate, which can trigger impulsive eating. This can lead to a vicious cycle of self-soothing with high-fat/high-sugar foods that may result in an eating disorder or obesity.  With each repeated cycle of craving and satiation, the influence of these foods on the dopamine system gets stronger and stronger, so the pathways in our brain become modified (through synaptic shaping) to attune more quickly to the unwanted behavior. And indeed brain imaging studies show the dopamine receptors in the brain availability is reduced in obese individuals (just as in people addicted to drugs), which makes them seek food because of understimulated reward circuits in the brain. Decreased availability of dopamine receptors in the obese individuals is also associated with decreased activity in brain regions involved in inhibitory control, which may explain their inability to control food intake.

So we can find some answers in the chemistry of our brain, but what about our hormones? We all know women are particularly sensitive to food carving because of fluctuations in the estrogen and progesterone hormones during pregnancy or PMS. Changes in estrogen and progesterone levels affect blood sugar, cortisol, or serotonin levels, which play a big role in mood swings and food cravings. 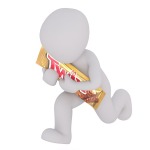 Also dieting and restricting from some food can trigger food cravings. Restrained eaters may experience more food cravings than unrestrained eaters. Strict dieting usually follows binge eating of ‘forbidden’ foods. But studies in this area are inconclusive. Some researchers say that deprivation of some type of food will make individuals crave these foods, while other researchers report that extreme dieting will reduce cravings.

So what can we do to avoid binge eating or to take at least some control of our food cravings? We all know when you up to that box of truffles, it is very hard to replace the craving with baby carrots or apple. And it is most likely we’ll end up eating not only carrots and truffles but even more…

There are several suggestions we can try to help us manage food cravings.

2.      Exercise is a natural antidepressant. It is believed a rise in baseline levels of dopamine and endorphins during an exercise is responsible for “runner’s high”. Aerobic exercise training also increases brain’s volume in both gray and white matter regions. And it doesn’t have to be a strenuous exercise to experience the benefits: walks, yoga, tai chi, or Qi gong all provide powerful mind-body benefits. 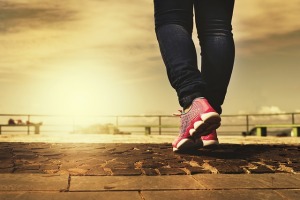 3.      Eating food with low-glycemic index and limiting consumption of high-glycemic index carbohydrates may help reduce food cravings and thus prevent overeating. The glycemic index is an indicator of how fast blood glucose levels spike after consuming certain foods. Magnetic resonance imaging (MRI) brains scans of obese individuals showed high levels of activity in a region which is associated with addiction after consumption of food with high glycemic index (white rice, white bread, chocolate, cakes etc.). Low-glycemic index food like whole grains, vegetables and legumes do not cause a great spike in the blood sugar level. Food with a low GI index makes us feel fuller and the brain does not receive the excess hunger signal which is common after eating high-glycemic index meal.

4.      When following a diet to maintain or lose weight it is a good idea to plan a cheat meal once a week. A cheat meal allows you to indulge in whatever food you desire without breaking your diet. It is a psychological component of dieting because it will make you stick to your diet a lot easier. But it will also boost your metabolism by normalizing your hormone levels. And it can prevent you from binge eating.